What’s Under The Hood

The seeding process on the covered greens was completed last week, and while I have described in writing what that process was, I wanted to show you exactly what we did. 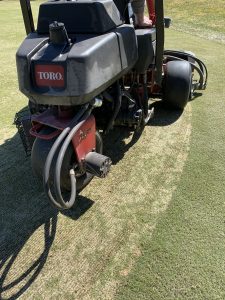 The first step was to verticut the green and create grooves just into the soil surface. Typically we use the verticutter on the greens every 2 weeks just before light sand topdressing, however we do not break into the soil at the depth for that process. For better seed/soil connection, we set the depth much lower to cut through the turf and into the soil layer for seeding purposes. 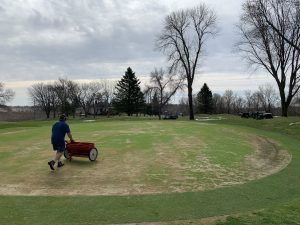 The second step was to drop bentgrass seed over the entire green with a drop spreader. 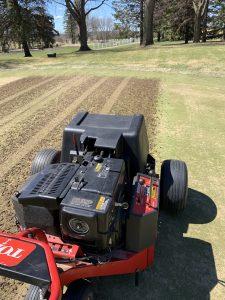 After drop seeding with bentgrass, we aerified the green with 3/8″ coring tines. Aerifying at this point brought up soil to work into the grooves by dragging. Another benefit of aerifying is it will aid in warming up the soil quicker when the temperatures start to climb. 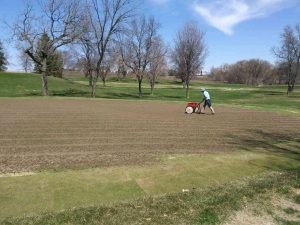 After aerifying the green we drop seeded with bentgrass again over the plugs. When the cores were dry enough we dragged the green with a steel mat to incorporate the seed and soil into the green surface. The tufts of turf and organic matter left after dragging were blown off the green and collected into a cart for disposal. 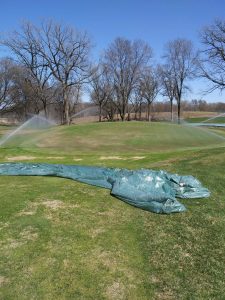 Once the green was cleaned of debris, a starter fertilizer was applied and watered in. Once the watering was complete, covers were put over the greens to aid in accelerating the germination process. The dark color of the covers helps to increase temperatures underneath them, and at this point any increase in temp is a great thing. The covers are also permeable, this lets much needed water in  and air exchange take place without having to remove them.